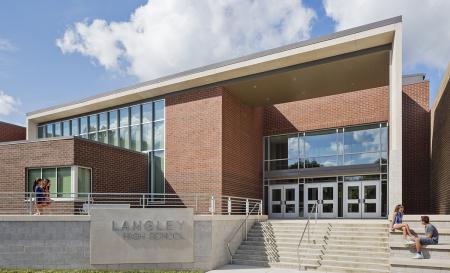 Langley High School is apart of Fairfax County Public Schools, and as such has fallen under its umbrella of coronavirus responses.

The Fairfax County Public School (FCPS) system has been racing to develop and then redevelop a viable system with which to continue its mandate of educating 188,000 students from up and down the socioeconomic ladder and across the spectrum of academic capability. The failure of the school system in accomplishing its mandate has become abundantly clear to all those who rely on it, not only for their education but also for all those who have placed their faith in the county to equip their children with the tools for a better future. Although these developments will be at the forefront of debate for the coming weeks and months, it is the duty of the citizens to look past this brief window of time and instead look towards the next year and the next decade; what is needed is a major overhaul of the upper levels of the school system.

Since its inception, FCPS has relied on the School Board to provide it with direction on its short term operations and a blueprint for its long term goals, this system has overseen; with some difficulty, major changes in the nature of education such as desegregation and the advent of the digital age all without a major shakeup or restructuring. Now is the time for the long overdue shakeup; the School Board needs to be molded to reflect the citizenry over which it holds sway (yes, that includes students) as well as being better tailored to respond to an uncertain future. By restructuring the Board, so that its members are drawn not just from primarily older and retired residents of Fairfax County but instead from the student body and the faculty who labor every day to ensure that the school system’s mission is fulfilled. The School Board should move to have nine members instead of the current twelve with two of those members being drawn from the high school population of the county, three members being drawn from the teaching staff of the school system, and four being elected from the residents of the county who have children currently enrolled in the public school system.

This new School Board would be able to take into account the needs not only of those who seek to ensure their property values remain high due to good school rankings but instead the needs of those who work there every day and know where resources should be allocated as well as the students who understand what their peers are struggling with and can help create the tools that are needed to maintain the standard of excellence that FCPS has maintained for so long. The new School Board would be better suited to face the challenged of an ever shifting educational landscape as it would be full of members who attend conferences about what the latest technology in digital interaction is going to be and by young men and woman who can pinpoint where the jobs of the future are going to be far more accurately than the cadre of retired layers that we currently have can. The Fairfax County Public Schools motto is “Engage, Inspire, Thrive” and yet it has failed on all three counts during this crisis not because it was poorly funded or lacked the technical know-how to handle the change but because it was incompetently led, a problem that can only be fixed with a radical change from the top on down.