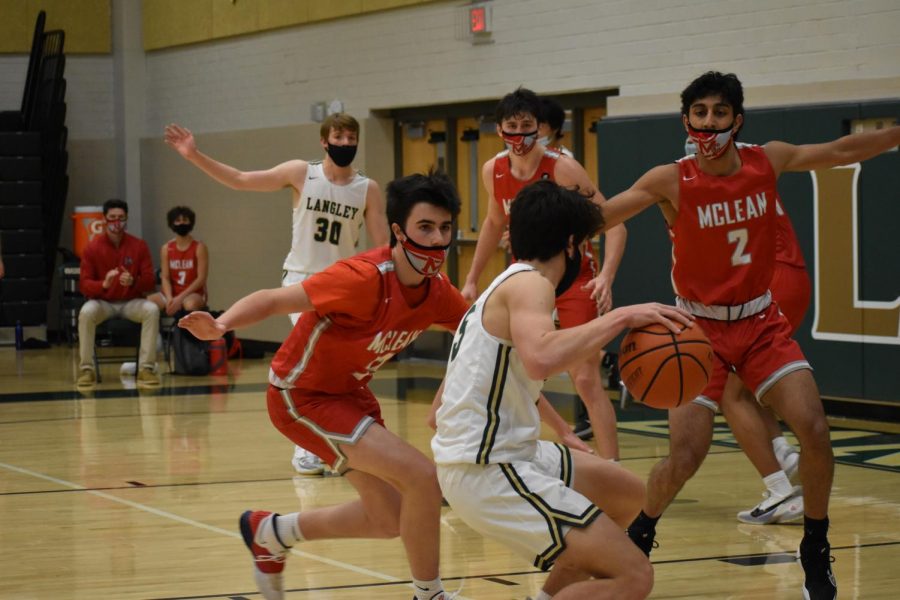 Sophomore Brendan Mansinne (#5) keeps the ball in Langley's possession while on offense. The Saxons were able to make a major comeback with their baskets in the second half.

The Langley Saxons defeated their rivals, the McLean Highlanders, this Friday night with a final score of 55-40. Even with a rough start, the Saxons were able to rally their energy and pull through to win the 2021 Rotary Cup. Over on McLean’s turf, Varsity Girls basketball won against McLean with a score of 59-34.

Langley’s starters included Jonathan Reiss, Brendan Mansinne, Amr Areikat, Jiaan Sehhat, and Michael Hoeymans. Langley needed a timeout in the first two minutes of the game, but then finally took the lead in the last minute of the half.

Langley kept their energy and held onto the lead throughout the second half. Although McLean was 10 points behind, they fought back and had the chance to take back their lead at the end of the third quarter. However, Langley was able to gain 15 more points with their strong defense and offense, shooting their way to a victory and the Rotary Cup.

Although the season has been different so far, Langley athletes continue to practice and participate as normally as they can while maintaining social distancing on the sidelines and wearing masks throughout the game. While students await their return to the building, athletics is just one of the ways Langley is making this unique year as close to a normal one as they can.

“Even though we were down in the first quarter we still felt like we were very much in the game,” Senior Mikey Hoeymans (#33) said. “Everyone started moving the ball more and hunting good shots after that.” During the second half, the Saxons seemed to be more oriented with the court and smarter about their defensive/offensive styles.

“I think at this point in the season our team has a lot of confidence and knows that we can compete with anyone we are up against,” Hoeymans said.