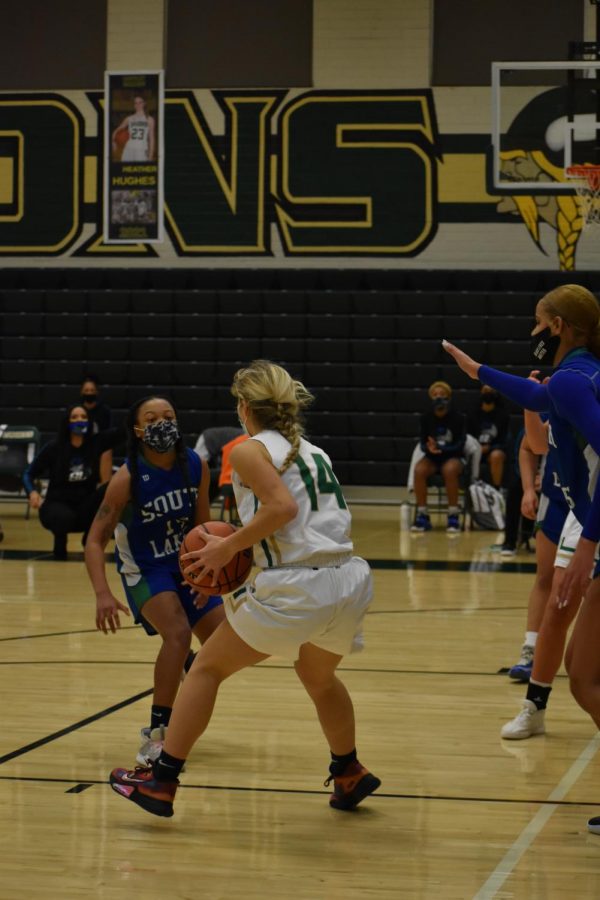 Senior Summer Thomas (#14) takes possession of the ball during the intense game. Even with a tough fight, Langley lost by three points.

Langley’s Varsity Girls Basketball team played a close game against South Lakes, with a nail-biting final score of 32-35 after South Lakes was able to score two more points in the final seconds.

The highly competitive game began with Langley in the lead 6-2 throughout the first quarter and ending it with a score of 14-7. The energy in the room only got tenser as the score tightened towards the end of the game.

“I’m pretty disappointed after the game, obviously it would have been a nice district win,” Senior Summer Thomas (#14) said. This is Thomas’ fourth year playing Langley basketball, and this year she holds a team captain position.

“Sometimes we have little mental lapses and we let the game get away from us, it would have been better to not have those,” Thomas said. The team’s energy is sometimes altered this year with masks and COVID-19 spectator restrictions, but Thomas has an optimistic viewpoint.

“Energy has to come from a different place – we can’t depend on the stands for energy so the team really has to keep up the intensity and hype, Thomas said, “I definitely miss the pre-covid fan section but I would say the team has adapted well.”

With fewer fans able to watch the games in person, the team experienced less cheering and moments of eerie silence during the game. The players had to depend on themselves and their teammates to keep the energy alive during the game and it was ultimately difficult for the team.

The game may seem strained with the empty bleachers, but both teams remained evenly matched with aggressive gameplay. By the end of the third quarter, the Saxons were in the lead 28-27 with both teams scoring seconds after the other. Unfortunately, Langley was not able to keep the lead and South Lakes was able to score a few more baskets in the end.

“I’m most proud of the fight, it was a super close game and we had some great pushes,” Thomas said.