Varsity Boys Basketball kicks-off first game of the season with a win, despite COVID restrictions 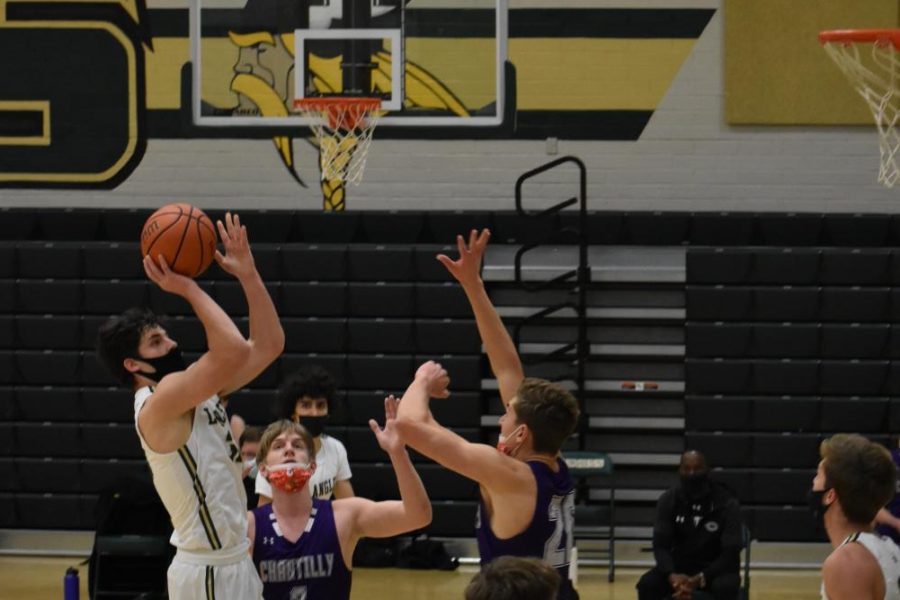 Senior Michael Hoeymans (#33) shoots and scores during the second quarter. Hoeymans finished off the game as Langley's second-highest scorer with 15 points.

Langley’s Varsity Boys Basketball team started their season off strong with a win of 66-62 against Chantilly High School. Even in a completely different atmosphere of empty bleachers and no cheering, the Saxons were able to adjust to their surroundings and pull out a victory.

To adhere to the new COVID restrictions, the players did not participate in a tip-off and the ball started in the opposing team’s possession. Langley began with a lead when Senior Michael Hoeymans scored the first 3-pointer of the game. Chantilly then took the lead until the 3rd quarter.

Amr Areikat, Michael Hoeymans, and Jiaan Sehhat were Langley’s top three scorers. At the half, Langley was down 29-39, but the Saxons were able to rally and fight until the end.

The Saxons started practicing two weeks ago with coaches from all former positions stepping up to lead the team. In Wednesday’s game, Steven Klein played a pivotal role as one of the lead coaches. Coach Scott Newman holds his position as head of the program, but Coach Klein and Coach Paul Wesnofske have stepped up to new roles as leading figures.

“It’s a collaborative effort between all of us coaches,” Klein said. “Putting our heads together to find the right solutions for these kids has been a challenge, but so far after one game it looks like it’s working.”

Klein was proud that his team has been able to adapt to the new challenge of playing basketball during COVID, especially with a shorter practice schedule.

“The kids did a really good job of raising to the challenge the coaches put on them,” Klein said. “Just taking direction and not quitting; fighting to the last buzzer was able to get us a win.”

Another new major COVID restriction is that players have to wear masks throughout the whole game, even on the court. Many players were able to take on this challenge the best they could, but many players had to adjust their masks often which distracted them from the game at hand.

“[Playing with a mask] is definitely tough, definitely a change; when the game really gets going and we’re breathing really heavily it can be really tough to get in all the air with the mask getting in the way,” Team Captain, Senior Jonathan Reiss, said. “But we practiced with them so that was good preparation and at the end of the day we’ll do whatever we need to do to keep our season going in a safe manner.”

Despite this new obstacle, Langley still played their best and was able to impress the viewers at home watching the game’s livestream through Twitter. Langley’s Student Activities staff hopes to air the future games on the Langley Sports YouTube page.

“I thought it was a real good group effort,” Reiss said. “We started kind of slow but at half time we really dialed in and focused as a group and were able to pull out a nice second half and a victory.”