A look at two of Langley’s most popular food critics 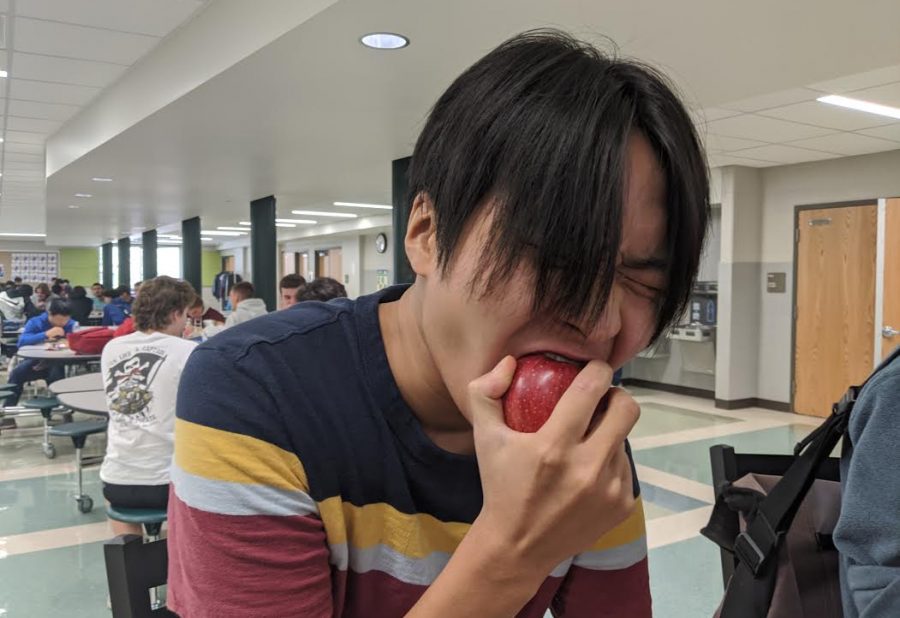 Junior Andrew Kim is behind the original Langley food review account, on Instagram as @thelhsfoodreview (Photo by Quinn Brown).

School lunches are one of the most universally hated parts of public schooling. Parents voice endless complaints over their lack in nutritional value, and students are often disgusted by some of the foul tasting dishes available for purchase. In a world surrounded by questionable food, a few brave Langley students have taken to Instagram to share their thoughts on school lunches– garnering a sizable following in the process. One such food reviewer is Andrew Kim, a junior at Langley, and administrator of @thelhsfoodreview; the first account in the current wave of school lunch reviewers.

“Originally, the account was totally a joke. I thought it would be pretty funny to overanalyze something as trivial as a frozen pizza pocket, and to post my thoughts in the style of one of those Instagram fast-food review accounts,” Kim said. Since its inception, Kim has reviewed over 20 meals, gaining him a cult following amongst the Langley student body.

Kim’s reviews are somewhat humorous, but he doesn’t take school lunch food lightly. His reviews can be harsh; however, in Kim’s eyes, it’s crucial to touch on both the negatives and the positives of a school’s lunch selection.

“The broad consensus on school food is that it’s sort of nasty. It’s more important, both to myself and frequent eaters of school lunch, that I talk about the negatives, so that everyone knows which items to avoid, and which items are a safe bet,” Kim said.

As he picks through a meal in the cafeteria, he scowls at the so-called nutritional facts printed along the side of the package.

“It makes me scratch my head when I see that one of our fruit options, the flavored cranberries, has 24 grams of sugar in a 3-inch wide packet,” Kim said. “Reduced fats and whole grain buns aren’t going to solve the long-term health problems caused by the overabundance of sugar, salt, and preservatives in our diets.”

Kim isn’t the only one with a lot to say about our school’s lunches. Senior Cameron Kohm is one of four friendly seniors who run the Instagram account @apes.food.review. Kohm and his friends post lighthearted and generally positive reviews that have earned them a large following in a short time, a following that currently surpasses @thelhsfoodreview.

Though they came on to the scene after Kim, Kohm and his friends shared a passion for food before they started their account.

From the start, @apes.food.review set itself apart from other accounts, often posting video reviews and sometimes featuring special guest reviewers.

“I think we’re different because we sorta have, like, fun, and make it, like, hilarious, like, with all the reviews that we do, we make it, like, school’s hard enough as it is, so, like, to lighten the mood, makes it a lot more fun,” Kohm said.

Positivity is a potent ingredient in @apes.food.review’s content. In fact, they’ve never rated anything below a 7/10.

Their approach to reviewing food differ’s from Kim’s approach significantly. The differences in style between @thelhsfoodreview and @apes.food.review have led to a friendly rivalry that can be observed in the comments on their Instagram posts.

“We have [heard of the other accounts], but they’re obviously not as good as ours,” Kohm maintains.

“I don’t really mind them, I just think they need to catch their own wave. If anything, they could put a little more thought into their reviews before slapping a score on them,” Kim said.

Whether you’re a cautious lunch line patron seeking an opinion on our school’s food, or just a Langley student looking for a fun account to follow, there’s much to love about these two unique accounts. @thelhsfoodreview and @apes.food.review are two shining examples of Langley students displaying their talents in an outside-of-the-box way.