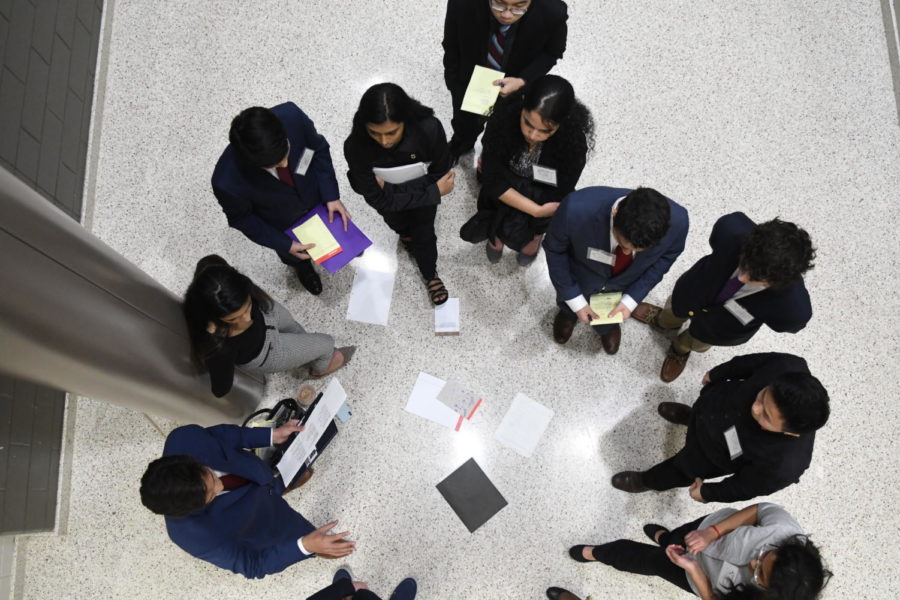 Saxon Halls flooded with delegates from middle and high schools all around the Northern Virginia area for one reason: MUN.  Langley High School Model UN hosted the Sixth Annual Virginia Invitational Model United Nations Conference (VIMUNC) on March 1 and 2 for the first time in four years back at Langley because of construction. Organizing a conference full of 18 different committees was the challenge, and the Saxon MUN Team accepted.

With over 800 delegations, the most ever, from high school clubs all over Virginia, it was a virtual guarantee to be one of the most competitive and academic conferences of the year.

“I helped around by setting up equipment, paging and assisting my chair, Max Ellis, and undertook several different challenging tasks,” sophomore Zachary Tam said, describing his busy role as a staffer at the conference.

Proving to have the toughest job, along with the other officers of the club, Secretary-General, senior Nick Hodge thought highly about how the conference turned out.

“It was a great time. We had a pretty much issue-free conference where we expanded Langley Model UN’s influence all over the state,” Hodge said. “While it was time-consuming and difficult, the smiles on people’s faces whenever they participated or won an award made it worth it. Knowing that I was responsible for a positive experience is incredibly rewarding.”

Langley Spanish teacher, Jennifer Stocks is the sponsor of the Model UN team and helped to aid the event. Even with all the work that went into planning the conference, the sponsor doesn’t regret helping the kids in the club.

“They needed a sponsor, and they’re a good group of kids. Model UN is a family and they care about each other,” Stocks said.  “[The team] definitely brings name recognition to the competitions we go to, because these kids do well, so people know Langley,” she said describing how proud she is of the students who run Model UN.

For many seniors on the MUN Team, VIMUNC was the last taste of high school Model UN they will ever have. Agreeing with Stocks, Hodge believes he’ll miss the team for it was a family at school for him as well.

“MUN at Langley is really a family, and it’s bittersweet reflecting on my time at Langley MUN,” Hodge said.